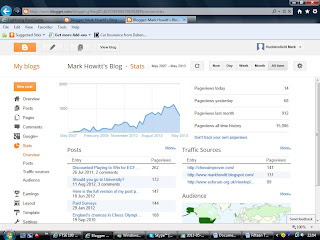 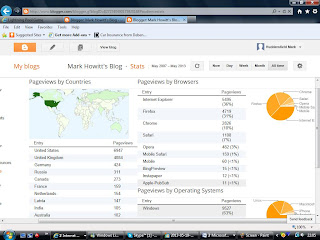 My first post here, I could barely write.
Four years after my novel came out, not that many people had bought it. Just come through a very stressful sales job. Now we’re nearly four years on from that... Just goes to show that you can lose things if you don’t practise. I haven’t spent as much time writing as I used to, but I honestly think I’ve created some killer minimalist posts on this blog.
Anyway, here’s a link to some of my best posts http://markhowitt.blogspot.com/2011/09/art-of-face-to-face-sales.html http://markhowitt.blogspot.com/2012/08/should-you-go-to-university.html http://markhowitt.blogspot.com/2012/07/everybodys-doing-what-they-think-is.html
The last one is probably the most relevant. Bit of clarification on it, everyone at any time is doing what they think is best for themselves. That doesn’t mean it is best for themselves- eventually too much drinking and smoking will kill you. But getting your goals is having a clear idea of what you want, then working with and sometimes against people to make sure you get them. And of course, people often get what’s best for themselves by working together with others. To do that you need quality people and ideally you should be helping each other towards your goals. Bluntly honest, I haven’t always been great at that, but I feel now I have a very strong network.
Anyway.... fifteen thousand. If you think of the numbers as people it’s hard to take in. Even if only one thousand five hundred properly read the blog it’s still a massive number of people. People ask me why I write, and it’s always pure self expression for me. I never write hoping other people will like it. Some of the things I’m thinking of writing now will be quite controversial, and probably turn a few people off. But really, that’s the kind of things I should be writing. You only live once, and I want people to say when I die that I’m an original writer.
Still, there’s part of me that does get a hit knowing the people like it. Pretty much all of the people I like read my blog, and I’ve reconnected with some real winners through this. Hope I inspire you all to express yourself more.
I definitely see me getting to six figures. Will use more time for writing and publish in different places. Here’s to the journey.
Posted by Huddersfield Mark at 14:49